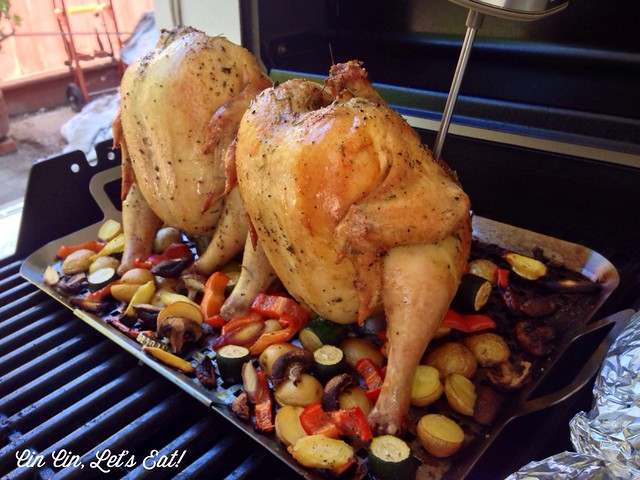 If you’ve never heard of “beer can chicken”, then you’re probably wondering what in the world is going on with these two chickens? I mean, they were so entertaining and fun to look at…dancing chickens!!! Basically you position a chicken on a beer can half full of beer (or broth of your choice), place the whole thing on the grill, close the lid and let it cook for an hour or so. The liquid does its magic and flavors the chicken while keeping it tender and juicy. It’s such an easy recipe, just leave it on the grill, close the lid, and check back an hour later. The hardest part for me was resisting the temptation to open the grill lid to take a peek! I know the last unofficial day of summer was yesterday but here in California, we are just getting to our Indian summer, which means plenty more weekends to barbecue and dine al fresco!

I received a double beer can chicken rack with drip pan as a gift so I used that to put both the chickens on as well as some vegetables to catch the dripping and roast along the way. You can use a regular beer can or I’ve even read that it’s perfectly fine to use a glass mason jar. Just fill 2/3 of the can or jar with the liquid of your choice (wine, broth, beer…etc.) and set the chicken over the container. But seriously, this was one of the easiest way I’ve ever prepared chicken and probably the juiciest and the most tender. Give it a try! 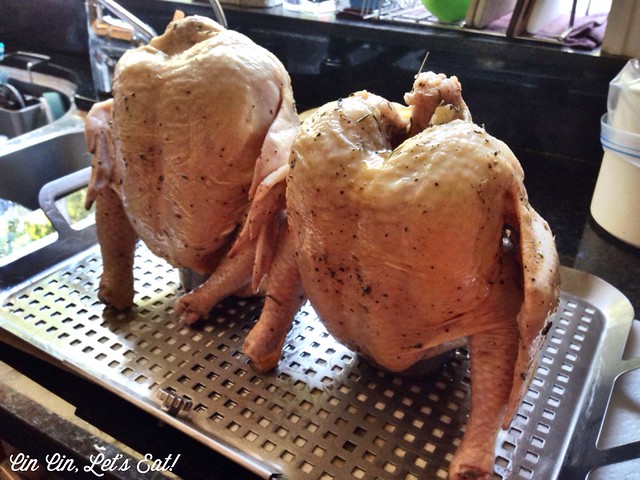 Rub the chickens with olive oil and season with salt and pepper and any herbs you like. 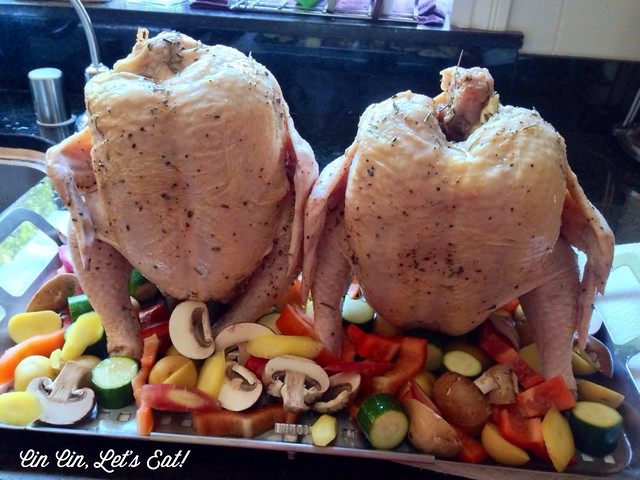 I filled the roasting rack with vegetables like mushrooms, zucchinis, potatoes, and bell pepper. I recommend large dices for the vegetables so they don’t completely char up, especially those mushrooms. 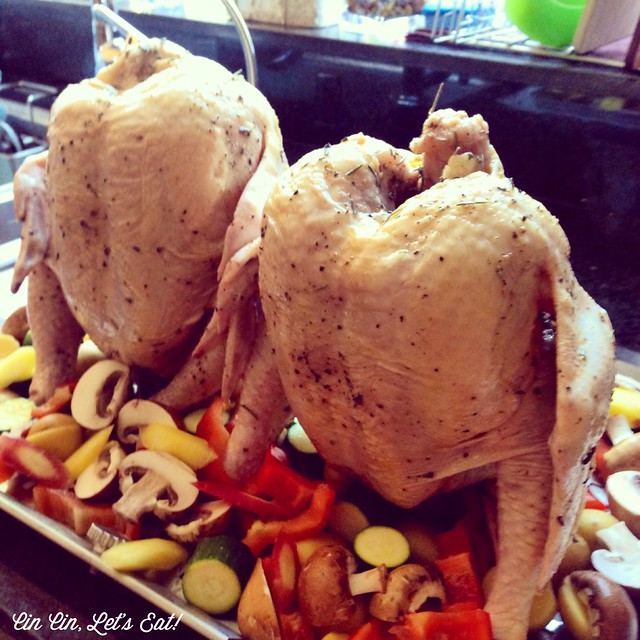 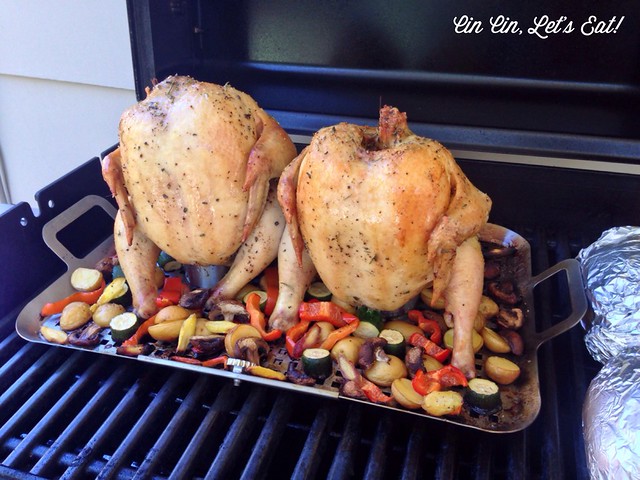 An hour and 20 minutes later. VOILA! I could’ve let them sit on the grill for longer to brown further but we couldn’t wait any further… (I also wrapped up some whole sweet potato in foil and let them cook alongside the chicken.) 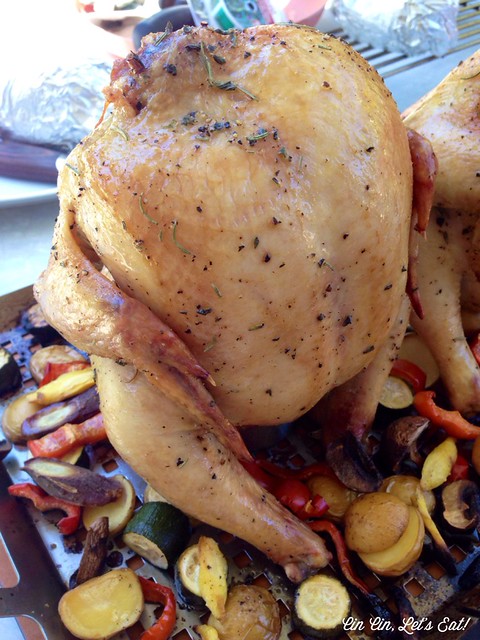 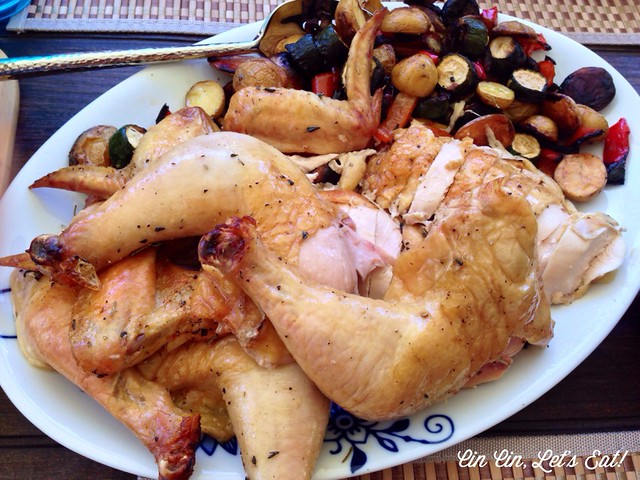 Carve out the legs and wings and slice up the white meat. 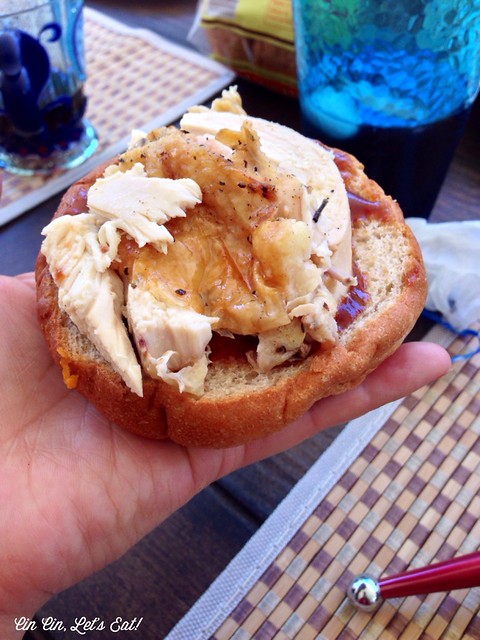 I prepared some soft buns and barbecue sauce and we enjoyed some delicious barbecue chicken sandwiches. 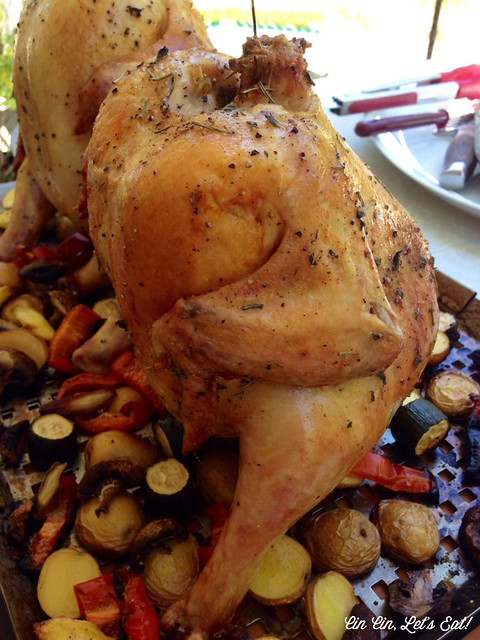 I grilled two chickens alongside, one with beer and one with chicken broth. Also diced up some vegetables, tossed them in some olive oil and salt and laid them on the roasting rack that came with the beer can chicken roasting rack. You can easily use any slotted grill pan for this. I also wrapped up some whole sweet potato (with skin on) in foil and threw them on the grill to cook with the chicken. A whole complete meal all cooking at the same time while I had time to mingle with guests.

Hope everyone had a lovely long weekend! And by the way, check out my instagram account that I just created in August. I post my culinary adventures there almost daily! (